The 36-hole leaderboard for the 2015 RBC Canadian Open at Glen Abbey Golf Club is in.  Here are my thoughts on some notable golfers near the top of the leaderboard:

09, so he’s definitely proven he has what it takes to win.

David Hearn (-11):  A Canadian (like myself) in contention at the Canadian Open; very exciting stuff.  He was in a playoff at the Greenbrier a couple weeks ago, so he’s no doubt in form at the moment.  A Canadian hasn’t won the event since 1954.  It would be fantastic if he ends up pulling out a win this week.  He’s definitely my favourite for the tournament.

Johnson Wagner (-11):  A guy who has definitely found some form lately.  Lost in a playoff at the Shell Houston Open this April.  His last three finishes in Tour events have been T5, T10, T3.  I wouldn’t be surprised if he was right there in contention on Sunday.

Jason Day (-10):  Awfully resilient.  He’s been playing well lately, which is really impressive considering he’s been battling pretty severe vertigo symptoms for a while now.  Tremendous talent, but unfortunately held back by persistent injuries.  It would be nice to see him finally break through and win big one of these days.

Erik Compton (-9):  Two-time heart transplant recipient, finished T2 at the U.S. Open last year.  It’s unbelievable how far he’s come.  It will be interesting to see if he can eventually close out a tournament.

Bubba Watson (-9):  Not surprised he’s up on the leaderboard again this week.  His form has been pretty sporadic lately — a win, a few top 10s, a few missed cuts.  This might be another one of those weeks where he finishes really well.  He’s shown he can handle the pressure and win.

Some quick comments on the Robert Allenby incident (he fired his caddy, Mick Middlemo, in the middle of his round today and withdrew):  I’m inclined to believe Allenby was out of line and his caddy just didn’t want to put up with it.  Allegedly it was the fourth Allenby caddy to walk off the course in the middle of a round; if this is true, it does raise a serious red flag against Allenby.  Who knows what really happened?  I know that if I was a Tour caddy, I probably wouldn’t want to work for Allenby.

Any thoughts on this year’s Canadian Open?  Leave a comment below! 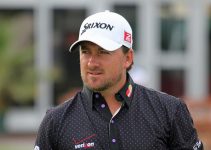